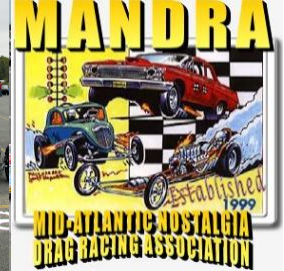 Gates open at 9am timeshots at 10am

MANDRA is a group of friends and racers united for one purpose—promoting nostalgia drag racing in the Mid-Atlantic region.  Our members are as varied as their cars. They come from all walks of life, but race as one group. At our races you will find friendship and comradery, not cut throat competition. Don’t misunderstand…
when two cars pair up at the starting line, the competition is real… each person wants to win, but it ends at the finish line!

We race as a group at eight or so different tracks in the Mid-Atlantic region. We have 14 or 15 racing events scheduled each year. We currently have over 75 members and are still growing. At some events MANDRA has more than 30 racers competing. Our
competition is fierce, but friendly.

MANDRA racing is supported by race sponsors. Plaques are given to each race winner, runner-up, and semi-finalists. Race winners also receive a winner’s decal. All members receive membership decals and have voting privileges. MANDRA points participants accumulate points throughout the season.

MANDRA has a program for you whether you attend or try to attend every race during the year, racing for the points championship, or race only at tracks close to where you live.

The top 20 points participants are recognized at our annual awards banquet each November. The top three drivers are given special awards and a new points champion is crowned.